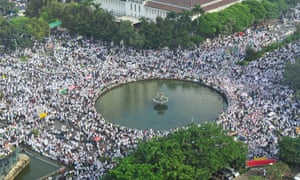 President Widodo – known as Jokowi – was set to arrive on Sunday for a three-day visit to meet his Australian counterpart, prime minister Malcolm Turnbull, as well as other ministers and business leaders. He was also scheduled to address the Australian parliament on Monday.

However, protests in the streets of Jakarta, which began peacefully on Friday in response to accusations the governor, a Christian, had insulted the Qur’an, turned violent.

Turnbull said he had received a call from Jokowi on Saturday afternoon to express regret that his trip would have to be rescheduled “as a result of the security situation in Jakarta which requires his personal attention”.

“I said we were sorry we would not be able to welcome him to Australia tomorrow but entirely understood the need for him to remain in Indonesia at this time,” said Turnbull.

“While disappointing, we agreed the postponement will not affect the need for continued and enhanced cooperation across a range of shared interests and challenges, including the threat of terrorism to our region.”

In September, the Jakarta governor, Basuki Tjahja Purnama, was accused by Muslim groups of insulting the religion after he said political opponents had used a verse of the Qur’an to deceive voters and tell them they should not choose non-Muslims as leaders. Critics interpreted his comments as a criticism of the Qur’an, and he apologised.

Purnama, the first ethnic Chinese to lead the Indonesian capital, is up for re-election in February. 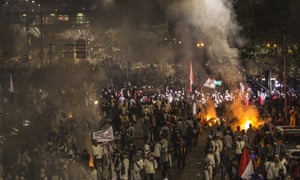 Jokowi called for calm as the protests – which swelled to an estimated 150,000 people following Friday prayers – escalated later in the night, and hit out at unnamed politicians for stoking the situation.

“We deplore the incident after the Isha prayers, when should have already disbanded but became violent. And, we see this was steered by political actors who were exploiting the situation,” he said.

Widodo, a Muslim, has vowed not to interfere in any legal proceedings against Purnama, according to media reports. But he said at his news conference that any legal process involving Purnama would be executed “swiftly, firmly and transparently”.

One protester has died, reportedly of an asthma attack, and 12 were injured in early skirmishes but reports later emerged of dozens of protesters and security personnel being treated for injuries. Police fired teargas and a watercannon at the crowds gathered around the presidential palace. More than 18,000 personnel and military were deployed ahead of the rallies, the national police chief, General Tito, said.

Turnbull said the visit would be rescheduled as soon as “mutually convenient dates” were found.

Negotiations on the Indonesia-Australia Comprehensive Economic Partnership Agreement would continue, he said.