EMail Us! Hello Guest! Not Registered or logged in?  Log in or   Register
Browse: Home / 2014 / December / West Papuans Unite Under New Umbrella Group 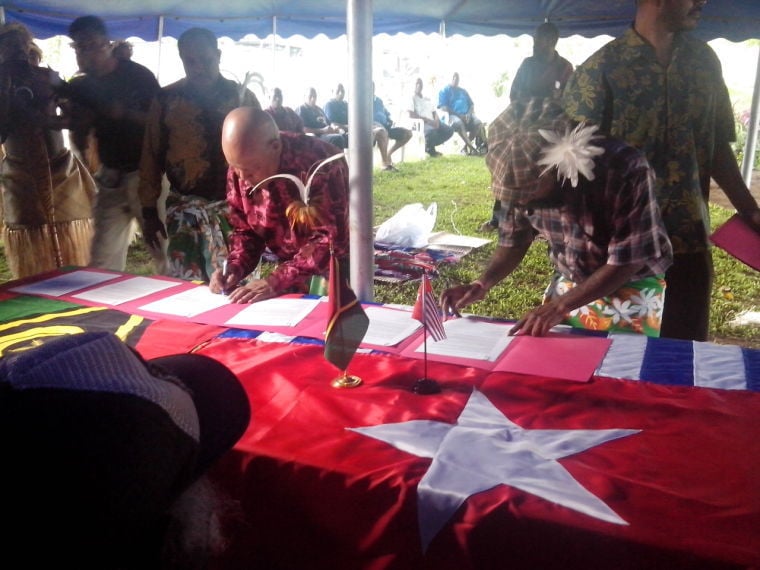 The SIgning of Statements forming ULMWP

The historic gathering of West Papuan leaders in Vanuatu from different factions in the independence movement have united,Saturday and formed a new body called the United Liberation Movement for West Papua (ULMWP).

This new organisation unites the three main organisations who have long struggled for independence in their own way.Coming together to present a united front will allow them to re-submit a fresh application for membership of the Melanesian Spearhead Group (MSG) as well as countering Indonesian claims that the West Papuan groups are divided.

“The negotiations and kastom ceremonies attended by leaders of all the major groups and observed by the chiefs, churches and the government of Vanuatu demonstrates that West Papuans are united in one group and one struggle,”the West Papuan Leaders said at the conclusion of their deliberations at the Chiefs nakamal in Port Vila on Saturday afternoon.

The key groups who have united include the:Federal Republic of West Papua (NRFPB), National Coalition for Liberation (WPNCL) and the National Parliament of West Papua (NPWP). An external secretariat consisting of five elected members from the various groups will now co-ordinate the ULMWP activities. Octovianus Mote has been elected as General Secretary of the ULMWP while Benny Wenda is the spokesperson and the other three elected members are Rex Rumakiek, Leone Tangahma and Jacob Rumbiak.

General Secretary Mote said at the close of the unification meeting, “I am honoured to be elected and very happy we are now all united.

The ULMWP wishes to express its profound gratitude to the government of Vanuatu, the Malvatumaurii Council of Chiefs, the Vanuatu Christian Council of Churches and the Pacific Council of Churches who have facilitated the week long meeting of delegates, who came from West Papua and around the world to unite after 52 years of struggle,a press statement issued at the conclusion of the Meeting stated.

The Declaration that was signed by leaders of the three West Papuan Group read:

“We declare and claim that all West Papuans,both inside and outside West Papua,are united under this new body and will continue our struggle for Independence.

“This meeting has been conducted pursuant to the decision made by the Melanesian Spearhead Group (MSG) in Port Moresby,Papua New Guinea in June 2014,that West Papuan Independence organizations must first unite before an application for membership can be re-submitted to the Melanesian Spearhead Group(MSG). We are now united and will re-submit an application under this new body, the ULMWP.

“We are determined that the United Liberation Movement for West Papua (ULMWP) becomes the Coordinating Body to support all international efforts to regain our sovereignty. In order to support this,we have formed a secretariat of five people;Benny Wenda,Jacob Rumbiak,Leone Tanggahma,Octovianus Mote and Rex Rumakiek,and representing the three largest resistance organizations and also all non-affiliated resistance organizations that support our struggle. We will maintain our existing organizations but commit to be united by the coordinating efforts of the United Liberation Movement for West Papua.

“This important and historic declaration has been made possible through the faithful efforts of the Vanuatu Government,Malvatumauri National Council of Chiefs,the Vanuatu Christian Council (VCC),the Pacific Conference of Churches (PCC) and the commitment of the liberation organizations.”

After the signing ceremony,the President of the Malvatumauri National Council of Chiefs and members of the Port Vila Council of Chiefs facilitated a reunification custom ceremony, for the three West Papuan Groups after many years of operating separately.

West Papua Reunification Committee chairman Pastor Allen Nafuki said, “The organizing committeeis very pleased with the outcome of the Meeting which achieved its objectives very successfully through deliberations and good understanding of all the three West Papuan Groups as well as the Malvatumauri National Council of Chiefs,the Port Vila Council of Chiefs, the Pacific Conference of Churches (PCC), the Vanuatu Christian Council (VCC), with the full support of the Vanuatu Government lead by the Prime minister Natuman, the Deputy PM,ministers present on Saturday and the people of Vanuatu.

“This could not have been achieved with the understanding of everyone involved,especially the three Groups of West Papua with their leaders and members of their delegations, the Vanuatu Government, the Malvatumauri, VCC and the PCC and many others support. The meeting has achieved its objectives for which we are all proud of and are thankful to God for His guidance.”

The signing was signed by three leaders representing the three West Papua Groups and witnessed by the President of the Malvatumauri chiefTirsupe,Pastor Kalsakau Urtalo on behalf of the VCC,Mr. Murray Isimeli, of the PCC and Vanuatu’s and former Vanuatu prime minister Barak Sope.

Details of the reconciliation ceremony along with various important speeches from different parties involved will be carried by the Daily Post in forthcoming issues.