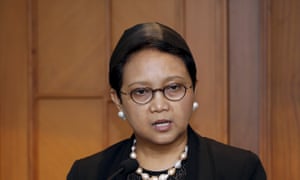 Indonesia’s foreign minister Retno Marsudi says she has been in touch with Julie Bishop to ensure the case of the trespassing protester in Melbourne is being investigated. Photograph: Darren Whiteside/Reuters

The Guardian - Indonesia’s foreign minister has urged Australian authorities to act against a trespassing protester who climbed on to the roof of the consulate-general in Melbourne and displayed a West Papuan flag.

A video of Friday’s protest shows a man scaling a wall to enter the consulate and climb on the roof to show the flag before climbing down again.

“Australia has the obligation and responsibility to immediately process this lawfully and to ensure the security of all Indonesian missions in Australia,” she said.

The minister said she had been in touch with the Australian foreign minister, Julie Bishop, on Saturday to ensure the incident was being investigated and legal process followed.

Victoria police said in a statement they were assisting the Australian federal police following the incident.

Last week, Indonesia temporarily suspended military ties with Australia in a spat over teaching materials at a Perth army base that included reference to the independence movement in West Papua, a sensitive topic for the Indonesian military.