Melanesian Spearhead Group foreign ministers are this evening meeting in Vanuatu's capital to discuss guidelines which relate to a West Papuan bid for membership in the group.
MSG senior officials met yesterday in Port Vila and, as with today's foreign ministers meeting, the findings of a constitutional committee review of MSG rules on membership are the main agenda item.
This comes as the MSG considers a full membership application by the United Liberation Movement for West Papua. 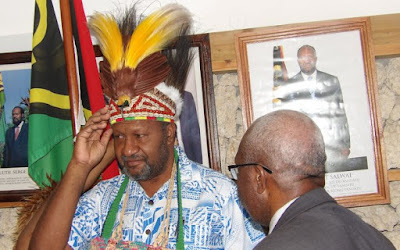 The foreign minister of Solomon Islands, Milner Tozaka, said the MSG leaders in July requested legal clarification on guidelines for membership.
"So that request has been attended to appropriately by the legal people and they have made a recommendation to be used for the foreign ministers to look at and then we will recommend it to the leaders for endorsement," he explained.
Milner Tozaka confirms there won't be a decision this week on the full membership application by the Liberation Movement, which already has observer status.
The leaders of the MSG member states are not expected to have their summit until early in the new year.
The Movement's leaders are present at this week's MSG meetings in Port Vila, along with leaders of all the main pro-independence groups.
Vanuatu's prime minister Charlot Salwai has reiterated his country's support for the Liberation Movement to be give full membership, as well as for West Papua to be independent.
Mr Salwai said his country's foreign policy remained firm that Vanuatu is not completely free of colonial bondage until all of Melanesia is free.
It's understood that Solomon Islands and New Caledonia's FLNKS Kanaks movement are also in support on the matter of the MSG membership.
However the other two full members of the MSG, Papua New Guinea and Fiji, have tended to side with Indonesia on this issue.
Indonesia, which has associate member status at the MSG, is firmly opposed to West Papuans being granted full membership in the group.
Jakarta says Papuans are already covered by the Indonesian republic in terms of representation in the MSG.